Residents at a Fife care home have been paid a visit by two adorable Shetland ponies thanks to Therapy Ponies Scotland.

Residents at Bield’s Grants Bank, in Dunfermline, were delighted to meet Apple Jack and Wilson, two specially trained therapy ponies, who were welcomed into the home and were a huge hit for both residents and staff alike.

Residents didn’t miss a chance to give their tiny new friends some love and affection, with lots of stroking and cuddles.

Apple Jack and Wilson, owned by Elaine and John Sangster, are two of fourteen therapy ponies from Therapy Ponies Scotland. These intuitive and loving animals offer major therapeutic benefits to those with poor mobility or co-ordination, anxiety, depression, learning difficulties or dementia.

The kind nature of the ponies meant that residents were able to stroke and touch the animals, stimulating a positive social response. 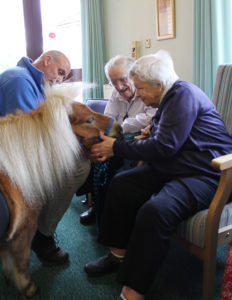 Theresa Williams, care assistant at Grants Bank, said: “I can’t express how amazing the visit of the adorable ponies was to not only the residents but also for visitors and staff.

“As soon as the ponies walked through the door, the atmosphere in the home was lifted and even after the visit the residents were still chatting about how much they enjoyed meeting the animals.

“The little ponies were so engaging which we found to have such a positive effect on some of our residents. The visit from Therapy Ponies Scotland is just one of the examples of how we aim to enhance the lives of our residents at Grants Bank.”

Activities like this embody Bield’s ‘Free to Be’ ethos which encourages everyone at their services to live their lives in the way they choose as much as possible.