KMINA: The crutch that avoids injuries in hands, wrists and shoulders Surprisingly something as necessary as crutches has barely evolved over time. Beyond the inclusion of bandages or padded hand-grips, no significant changes have been made since ancient Egyptians. 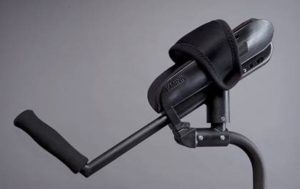 KMINA has developed a new crutch concept in order to improve the mobility and quality of life of users. This new crutch reduces pain in hands, wrists and shoulders thanks to a revolutionary design.

Aware of the damage caused by traditional crutches and given the clear need for improvement in this field, KMINA has patented a totally revolutionary crutch. It includes a shock absorbing system and a tilted forearm support that properly distributes the weight of the body. Thus, the effort is evenly shared, and both the hand and the wrist reduce the burden by 80%.

Acknowledged as one of the best orthopedic surgeons in the country, Dr. Jaime Usabiaga is part of the project as a Counsel Partner since the beginning.

After many years receiving patients who complained about the pain caused in their hands by crutches, he decided to sponsor this entrepreneurial initiative to solve the problem. “I have come across many cases where long term use of crutches has led to wrist and hand injuries, hurting patients in their recovery processes”, Dr. Usabiaga says.

Social Crowdfunding on Kickstarter to boost the startup 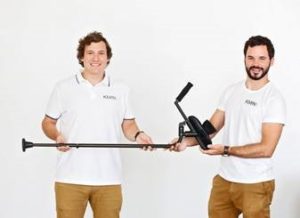 In order to produce and commercialize this crutch, the startup has launched a crowdfunding campaign on Kickstarter. Anyone can support this project until October 31st. You can donate a pair of crutches to the elderly, ALS and neuromuscular diseases patients, thanks to the partnership agreements that KMINA has signed with three non-profit associations; ADELA, ASEM Madrid and CIMA.

Throughout the creation process, KMINA crutch has been tested by users and industry professionals, whom have unanimously concluded that this model represents a clear step forward because of the comfort and security transmitted.

KMINA has already been awarded with the 1st prize in the category of Research, Development and Innovation in the latest edition of the Caser Foundation awards. The company is also among the best 10 social startups in Spain, according to “La Destilería de Startups”. Both awards are a sign that the project represents a clear social progress.

The talent that lies behind KMINA

Jaime Usabiaga, Counselor and Founding Partner. Chief of the Orthopedic Surgery and Traumatology Division at Hospital Universitario Donostia, Professor, author of more than 70 articles and speaker in many congresses. But most of all, he really knows how painful crutches are. OT helps people with dementia stay on track with a satnav