It’ll be lonely for carers this Christmas, finds new study by charity Revitalise With many of us looking forward to enjoying the festivities this holiday season, a new study by national disability charity Revitalise has worryingly revealed that many carers have far less reason to be jolly this Christmas.

Worse still, at a time when most people are looking forward to relaxing with family and friends, the Revitalise study found that 6 out of 10 (60%) of carers feel unable to ‘switch off’ from their caring role, with more than two thirds saying they are always tired (69%), feel mentally exhausted (63%) and over half (61%) admitting they have trouble sleeping. 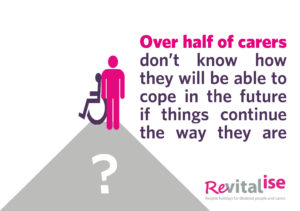 And, with the New Year fast approaching, it’s evident that the plight of unpaid carers all across the UK does not lend itself to an optimistic outlook for the future either. More than half of carers (52%) did not know how they would be able to cope if things continued the way they were. 4 out of 10 (40%) also expressed concerns that they would end up ill, in chronic pain or disabled themselves; not surprising since more than 5 out of 10 (55%) of carers had been caring for 10 years or more and a shocking 45% had sustained injuries or chronic health conditions as a direct result of caring, the survey revealed.

In light of the study’s findings, Revitalise is calling for more funding from central government to enable local authorities to give unpaid carers all the support they need and is renewing its call for sufficient funding for respite breaks to be a fundamental element of all social care provision.

Revitalise is also delighted to have the support of Revitalise Vice-President, Dame Esther Rantzen, who is fronting the charity’s 2016 Christmas Campaign, ‘Shining a light on loneliness’. Those wishing to make a donation to Revitalise’s work are kindly asked to visit: www.revitalise.org.uk/christmas-campaign. Every penny donated will go into the Revitalise Support Fund to help those struggling to afford a break. 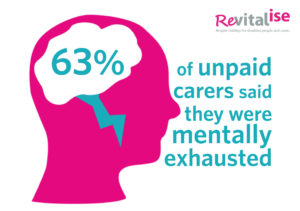 Picking up on the key issue of loneliness, Dame Esther Rantzen, added:

“It is thanks to the dedication and commitment of the 6.5 million carers in the UK that not only are our parents, siblings and children looked after with love and compassion, but also the UK economy benefits enormously. So it is somewhat depressing to find that 4 out of 10 carers feel lonely.

“This feeling of isolation must be felt even more keenly at Christmas, a time of year devoted to family and togetherness. That’s why I’m urging you to support Revitalise’s campaign to give unpaid carers the recognition they deserve and help combat the damaging effects of loneliness. Please, give what you can – and help us rekindle the true spirit of Christmas.”

Revitalise is a national charity providing respite holidays for disabled people and carers. Revitalise provides short breaks, with 24-hour nurse-led care on-call and personal support, at three accessible centres in Chigwell in Essex, Southampton and Southport. Each centre offers a wide range of accessible activities and excursions in a holiday environment.